When you first sold your body into their service, the Company wiped your brain of all personality and memories. Then over and over they imprinted you with new minds, sent you out on dubious missions and wiped your brain again.

Now that your term of service is over, you are being given the option to become who you originally were and to be released back into the world. But what sort of situation were you in before that led you here? Were you just down on your luck, or were you a hardened criminal? And when you find out who you were, will you want to return to your old life?

Did I Fall Asleep? is a freeform larp about identity, exploitation and the unknown. It requires 6-12 players plus a GM and plays in about two hours.

In order to download this larp you must purchase it at or above the minimum price of $3 USD. You will get access to the following files:

Did I Fall Asleep? takes its title from a line in Dollhouse, and it shares other thematic elements with the show too.

Broadly, it is a two-room larp about the re-acclimation (or rejection) of a memory-wiped operative to their former life.

Because it plays with identity, volition, and exploitation (economic, vocational, or personal,) Asleep is very likely not going to be an ideal experience for everyone. It also begins with a guided meditation centered around telling yourself that your memories and personality traits are not real, and I don't think that's something I'd ever implement in a game I was running.

A company that makes its money off of deprogramming and reprogramming human beings has a lot of leeway and motivation for some deeply unethical behavior re: its service agreements and what it actually communicates to its agents, but the one in Did I Fall Asleep? is weirdly on the up and up.

Character creation is also really strong, with the group taking a sort of on-the-spot personality test that generates their backstories in a way that is somehow both smooth and uncomplicated.

Gameplay is largely sort of a waiting room sim. Everyone gets called in to talk with the GM one on one, and the rest of the group is talking and waiting. There aren't combat mechanics, so things could potentially go off the rails if a player decides to take the GM character hostage or something, and there also aren't any plot forces (just social pressure) to stop people from just walking out.

Still, the overall game feels focused, tense, and eerie without ever going fully dystopian, and this might make for a really cool game for a group that wants to explore themes of identity in a way that never gets fully resolved.

Thank you so much for your post about Did I Fall Asleep. It touched on a few points that are important to me.

This can indeed be a powerful game, and not only in a good way. That’s why I’ve been tailoring the safety mechanics and other components based on player feedback over the past three years. You pointed out the opening meditation, which was identified to me the last time I ran the game as a potential danger. Even though the closing meditation can be very effective in returning the players to themselves, the opening one needs work to be made safer. I have been working on an updated version of the game where the opening meditation guides players in a safer way, offering them the choice to moderate how personally they take the instructions.

The straightforward nature of the evil corporation in the game is an intentional design component. They know that their actions are fully legal, and they’ve got at least one governmental department backing them, so for them ethics are irrelevant. They don’t need to be deceptive: they hold all the cards when it comes to dealing with their agents and they know it. I feel this mirrors real life in an unsettling way. In the corporate world ethics has teeth only as far as it is legislated and enforced. As long as it is in compliance with local laws, a corporation has no motivation to act ethically if doing so would harm its profits. It will exploit its employees, buy its materials from overseas slavers and dump its waste wherever is cheapest. As long as it doesn’t explicitly admit to the public that its actions are unethical, it can be quite transparent about its business practices. Its shareholders don’t care, and no harm comes to the corporation.

Thank you also for mentioning the lack of combat mechanics. Funny enough, the exact hostage situation you described happened in my very first run of this. I feel I should include guidelines for physical touch within the game, but I want to be careful not to do so in such a way that I prime the players for a fight. That’s another design consideration I have for the version in progress.

Thank you again for taking the time to share your feedback on my game. If you wind up facilitating it I would love to hear how it goes.

I want to clarify that I don't think the presence of a danger means the game is bad, just that it limits who can safely consume/interact with it. I noped out of the meditation at maximum velocity, but it might be an interesting immersion tool for people who are both comfortable with it and who take care not to internalize much of it.

Re: hostages, the cut/brake rules for contact are really good and well-explained, and I think they do a good job of covering what players need to do physically to safely navigate that type of scene, but it didn't feel like there were any directions to the narrator for what to do if a hostage-taking or escape attempt happens. Even a "the guards are called and they sterilize the facility" option would give hostage-taking a way to naturally escalate to a conclusion instead of needing to de-escalate for narrative reasons---and having a path where one or more operatives could actually escape would add to player agency and provide an interesting sequel hook.

I think I understood your meaning fairly well; I didn’t think you were saying the game was bad. I’m very aware that as written this game is definitely Not For Everyone. My hope is to rework the meditation so that players have a built-in immersion dial. Sort of “if you want intense immersion do x and if you want a bit more distance do y”. But I think this will never be a game that everyone can safely play.

When my GMC was taken hostage I improvised a bit about how there were guards outside the door and they wouldn’t mind endangering me if it meant keeping their assets safe. I think I’ll add a few examples of how to handle an uprising. Thanks for the suggestion!

Glad to hear it! This game is indeed a love letter to Dollhouse. I’ve taken some liberties with the background story and other elements though. Note that no familiarity with the source material is necessary, or even particularly useful, in this game.

First of all, absolutely wild number of players in comparison to other RPGs (how many friends do you have??!!) but understandable considering the format of the game. Will probably benefit from me waiting until the pandemic is over to have an actual room in where to have this, because otherwise voice chat is going to be Crowded(tm)

Also my fucking favourite part of this is the casting choice, hello? You get a character depending on your answers to basic philosophical questions? Sign me up! It sells the atmosphere of the game perfectly right from the beginning. Personally I'm a Scorpio, I think. Relatedly, a question: four characters are "required" by the game, but what if they have to be removed due to triggering topics? I think I know my players' limits relatively well and can assign them accordingly, but it's still something to consider.

Also also, I really like all of the characters! Would have loved a bit more about them but I understand the need to leave it open for the benefit of the players. Libra and Taurus are absolutely genius. Virgo has to be my favourite (what in the hell is even going on with them), but I really like 2805 as well.

Anyway, thank you so much for the game! <3

Thank you so much! I’m glad you like my game.

Once upon a time I had enough local larper friends to run games this size easily. but most of the runs I’ve facilitated have been at conventions. I’ve been thinking of creating an online setup where there are multiple chat rooms, so people can talk in smaller groups. If I come up with something viable I’ll definitely add it to the game page so folks who have the game have access to it.

I cannot take credit for the Cartesian casting method, but I do claim credit for having made up that name just now. I think I first saw it in Factory Reset, by Ash Kreider, which was the inspiration for Did I Fall Asleep. And the fun thing is that your exact casting location varies depending on who else you’re playing with and on whether you’re answering the questions on behalf of yourself or on behalf of the character you want to play.

The interaction between required characters and topic exclusions is tricky. Without going into spoilers here I’ll say that there’s one pair of characters who could hypothetically be swapped for others. It would require some work on my part to write up some new questionnaires, but that’s a really good idea for a future version. Thank you for suggesting it! The other two required characters are fairly directly important to illustrating the nature of The Company, and their sensitive topics are ones that cannot be avoided while playing this game. I’ve started making notes for the next version of the game to expand on that.

I’m glad you’ve enjoyed reading the game, and when you get a chance to run it I would love to hear how it went. Thanks again! 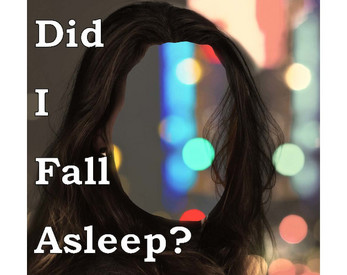